Researchers have varying opinions on the impact of social media on an individual’s mental health. Some believe that excessive use of social media causes mental illnesses and disorders like depression and anxiety.

Others think there is no substantial proof and that social media use can actually be protective from such issues, especially during global lockdowns and social distancing.

Because social media is a new technology just over a decade old, we don’t have sufficient data to conclude if social media use is causing mental health problems. However, examining existing social media and mental health statistics can provide insight into this new and pervasive phenomenon.

Facts and Statistics About Social Media and Mental Health

2. Social media can affect an individual’s sleep negatively, which can lead to sleep disorders like insomnia.

About 21% of adults wake up in the middle of the night just to check their smartphones, and approximately 70% check their social media accounts before going to sleep.

The blue light of smartphones and computer screens disrupts the circadian cycle and can lead to disrupted sleep and insomnia.

3. A causal link likely exists between social media use and depressive symptoms.

The statistics on social media use and mental health in the past years have been contradictory, mainly due to the fact that social media is a relatively new phenomenon.

An experiment on college students showed that those who limited their social media use to ten minutes per day showed decreased levels of depression and anxiety compared to the group that used it as they pleased.

This lends to the theory that social media shares a causal relationship with mental health issues.  Some argue, however, that most samples on social media are done on college students, which have their own unique set of issues relating to mental health.

4. New studies show that social media isn’t as detrimental to mental health as we once thought.

Since its onset, researchers have speculated that there is a relationship between social media use and rates of depression and anxiety, especially among teens and young adults. While social media and depression are correlated, the causal assumption is being called into question.

New research shows that 63% of social media users are less likely to experience psychological distress related to anxiety and depression than their non-user counterparts.

The contradiction between these statistics and other studies may be due to the age groups that are studied. While much of the research observes teens and young adults, social media users include all ages and, as such, face different pressures and experiences with these platforms. 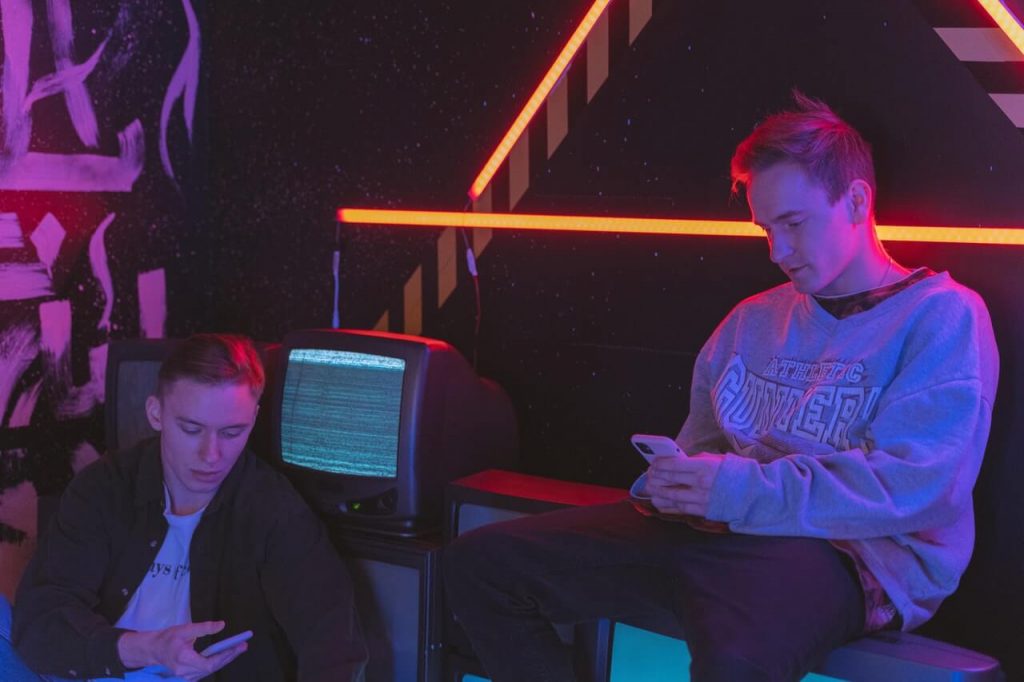 It’s difficult to point to a single factor that is driving the increase in rates of depression and suicide among America’s youth. More and more psychologists are convinced that social media affects the mental health of teenagers, however.

The most recent available data shows that depression among adolescents increased by 60% in the last eight years.

6. The number of times teenagers check their social media accounts is correlated to psychological distress.

Apparently, 13-year-olds who check their social media accounts 50 to 100 times a day experience psychological distress 37% more than their peers who only check a few times a day.

7. Young women who spend time editing photos are likely to have low body-esteem.

Statistics about social media and mental health suggest that young women are becoming more self-conscious about their bodies because of social media. About 29% of teenage women feel less beautiful after seeing pictures of their friends on social media.

Notably, one in three girls feel pressured to edit their photos up to the point where they no longer look like themselves. This need to filter and edit has become a major part of the lives of 52% of young women and girls with low body-esteem.

One of the most recent statistics on social media and mental health in teens shows a strong correlation between depression and social media.

Experts believe the excessive time on social media causes adolescents to lose time participating in face-to-face relationships and encourages the comparison of one’s own life to a curated life ideal that is portrayed on profiles online.

9. Social media appears to be helping students cope better during the pandemic.

The reports on the negative impact of social media on the mental health of students is prevalent, but the pandemic is changing this perspective as social media is becoming a refuge for people of all ages.

About 41% of students say social media has helped them feel less lonely during lockdowns and social distancing protocols. Further, 28% of teens report feeling less anxious because of social media despite the barrage of disheartening news about the pandemic.

10. Social media has the potential to impact suicidal teens negatively and positively.

The most recent social media and mental health stats on suicidal teens show that social media may be protective, contrary to popular belief.

Reports indicate that while 67% of teens feel worse about themselves because of social networking sites, 73% say they feel supported on social media during difficult times.

Even more so, 93% say they feel more connected to their friends because of social media websites.

The latest study on cyberbullying shows that 34% of teenagers have been bullied on the internet. That’s more than one-third of all adolescents. What’s more alarming is the long-term effect cyberbullying has on students.

Research suggests that more than 60% of students believe cyberbullying made them feel unsafe at school, negatively affecting their cognitive skills. Unsurprisingly, these feelings pushed 10% of the students to skip school at least once in one school year.

12. IGen stats on social media use and mental health show us that iGen is more susceptible to mental health problems than millennials.

More devastating, for 10-to-14-year-old girls, the rate increased by 189%. Interestingly, the hospitalization rate for self-harm among young women between the ages of 20 and 24 was only 17%.

Researchers believe that social media is a primary difference between current generations and those before, but other factors may contribute as well, such as overprotective parenting trends.nh

Social Media and Mental Health Statistics in the USA

13. More than half of Americans believe that social media negatively impacts the country.

The survey shows that 64% of Americans believe they see negative effects of social media on the country. Those who view social media negatively point to misinformation and harassment as the leading reason for their conviction.

Primarily, respondents were concerned that social media users believe everything they read online.

14. Adults in their prime years, aged 23 to 38 years old, have the highest percentage of social media addiction.

The Anxiety and Depression Association of America characterized social media anxiety disorder as a mental illness with symptoms similar to other anxiety disorders. This includes neglecting favorite activities, withdrawal from loved ones, and spending more than six hours using social media per day.

According to stats on mental health and social media, about 20% of people with at least one social media account suffer from social media anxiety disorder. These people are plagued with urges to check their accounts at least once every three hours to avoid feeling anxious.

16. A significant percentage of Americans are addicted to social media.

Mental health and social media dependency statistics report that about 5% to 10% of Americans suffer from social media addiction.

People with this kind of addiction experience the same symptoms as any other substance use addiction. This includes behavioral changes, withdrawal symptoms, interpersonal conflict, and relapse.

Researchers attribute this addiction to the brain’s production and release of dopamine, a type of neurotransmitter responsible for our feelings of pleasure. Studies show that social media produces neural circuitry similar to gambling and drugs. 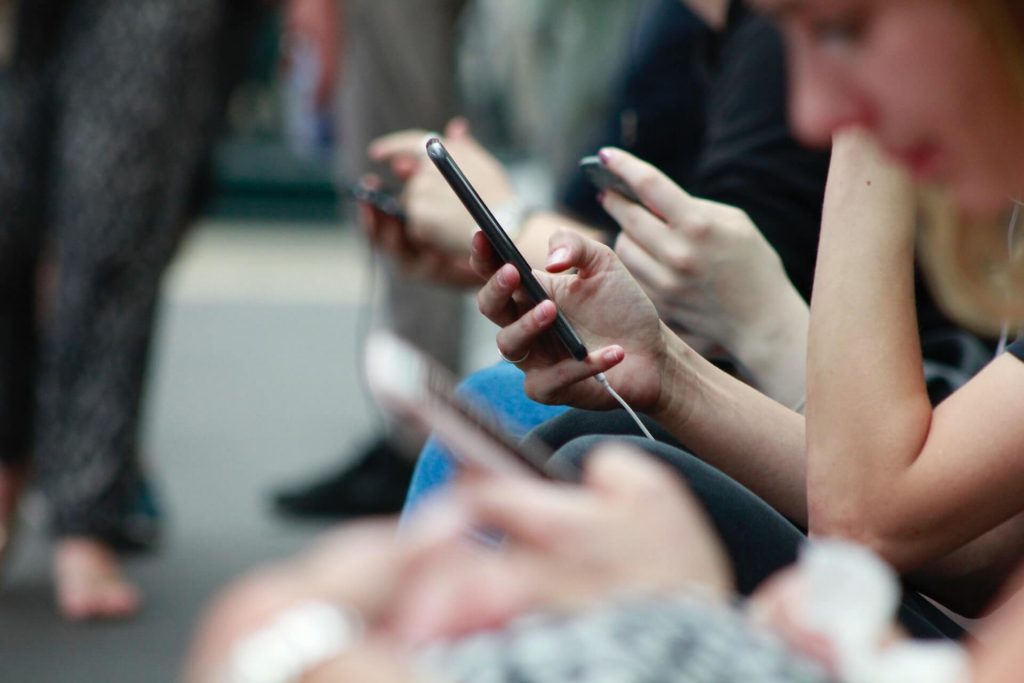 17. Young adults in Australia suffering from anxiety have more screen time than the general population.

Out of all the mental health issues in Australia, anxiety seems to be the fastest-growing condition. Researchers point to several factors that contribute to this growth rate, and that includes social media.

According to the latest social media and mental health statistics in Australia, young adults suffering from anxiety appear to have more screen time than their peers. They spend an average of 764 minutes a week, while the general population spends about 675 minutes per week.

18. Social-media-active women in the UK are at greater risk of suffering from mental health problems than men.

It’s not exactly news to most people that young women spend a lot of time on social media. This prolific usage makes women more susceptible to mental health problems because of sleep deprivation, cyberbullying, and low self-esteem.

One of the most recent social media and mental health statistics in the UK reveals that cyberbullying and sleep deprivation account for 60% of psychological distress among young women.

19. A significant percentage of teenagers and adults in Canada experience mental health issues as a result of social media use.

A recent study on social media and its effects shows several negative impacts on Canadian users across all ages.

The social media and mental health statistics in Canada for users aged 15 to 64 show that 12% to 14% reported feelings of depression, anxiety, envy, frustration, and anger, and approximately 18% said they encountered issues in concentrating on tasks.

20. About half of social media users worldwide experience low self-esteem.

Approximately 91% of women worldwide struggle with body image. It doesn’t help that social media has created an environment in which it is expected to always look good.

The attempt for users to receive thousands of likes and shares creates a dystopian world where social media attention directly relates to one’s self-worth.

While the evidence on social media and its effects on mental health are somewhat contradictory, there’s no denying that there is a rising concern about mental health problems across the globe.

Perhaps the causal assumption that social media causes teenage depression and anxiety is unfounded, but there is no denying that it is a contributing factor, especially among youth.

Limiting daily amounts of time on social media, encouraging face-to-face interaction, and promoting healthy self-image are all protective against social media addiction and its potential negative impacts for all users across age, gender, and geographic location.

Studies show that social media has the potential to affect an individual’s mental health in many ways. The constant barrage of photos depicting a seemingly perfect life and appearance leads people to feel inadequate about their lives and bodies.

Excessive use of social media can also lead to addiction. When we receive approval and validation from our peers, our brains produce dopamine, a neurotransmitter responsible for our pleasure feelings.

The brain will associate this pleasure with the likes and comments we receive from people. This creates a cycle that eventually leads to addiction.

Why is social media good for mental health?

Despite the admonition of some researchers on the prolific use of social media, there is a chance that it’s really not all that bad.

Staying connected boosts a sense of self-worth and value and thus can be protective against suicidal thoughts or feelings of hopelessness.

How does social media influence depression?

Most researchers are convinced that increased social media use can fuel feelings of depression and anxiety. Because the technology is relatively new, with little more than ten years to study, it’s difficult to make concrete claims.

The current social media and mental health statistics, however, do seem to point to the detrimental effects of excessive social media use.

Most of the photos we see in social media are edited and filtered, yet users feel inadequate and pressured to have an “ideal life” or the “perfect body” after scrolling through social networking sites. Statistics show that 29% of young women feel less beautiful after seeing their friends’ photos.

Teenagers who are active social media users are also at a greater risk of experiencing cyberbullying. Being at the receiving end of hurtful rumors and abusive words can push individuals to increased levels of loneliness and anxiety.